Unlike videos, podcasts are hard to share on social media.
Auphonic can now generate shareable videos from audio files, including a dynamically generated waveform and your cover image (or possible chapter images) as background. 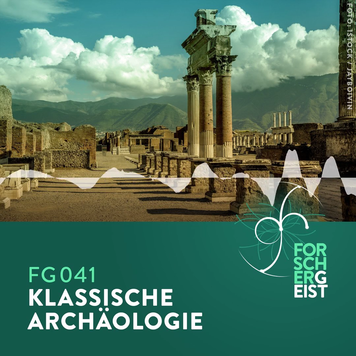 Audiogram screenshot from the podcast Forschergeist.
See our Audiogram Examples below for full example videos.

Getting people excited about listening to podcasts on social media is hard.
A few services and tools emerged in 2016, which tried to generate shareable video clips from podcast audio files: WNYC Audiogram Generator, Clammr, Wavve and more.
Most of them include a dynamically generated waveform, which encourages people on social platforms to unmute the audio (videos are often autoplayed and muted by default).

The New York Public Radio WNYC conducted experiments with short teaser/trailer videos (about 30 seconds) for podcasts and called them audiograms.
In the blog post The Future of Social Audio is Here, Presenting the Audiogram Generator, they released their own audiogram generator code, demonstrated why sharing podcasts is so hard on social platforms and also presented some results:

WNYC shows have been seeing great results. On Twitter, the average engagement for an audiogram is 8x higher than a non-audiogram tweet and on Facebook some of our shows are seeing audiogram reach outperform photos and links by 58% and 83% respectively.

We at Auphonic created videos from cover and Chapter Images since 2012 (see Video Generation), but we did not include a waveform so far.
As the great Audiogram Generator Code from WNYC is rather complicated to install and maintain, some of our users asked us to include an audiogram generator as well.

In our implementation, you can not only create short teaser videos, in addition to that it's also possible to generate long audiograms to upload complete podcast episodes to Youtube and to use Chapter Images so that the background image changes over time.

Since our Web Service is free for 2 hours per month (see Pricing), it's possible to create a lot of short audiograms using our free plan.

How to Create Audiograms with Auphonic

To generate an audiogram in our Web Service, you have to Upload an Audio File and a Cover Image. If the background image of your audiogram should change over time, it's possible to upload multiple Chapter Images as well.

Furthermore, you have to add an Audiogram Output File in the section Output Files: 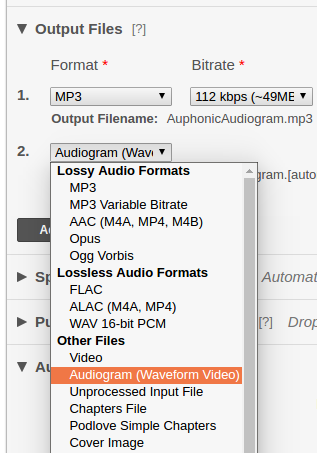 If a YouTube Export is selected in the section External Services, the audiogram video will be exported to YouTube as well!
NOTE: If you don't add a video or audiogram output format to your production, Auphonic automatically exports a Video Output File with still-images (no audiogram) to YouTube.

For short audiograms (shareable teaser/trailer videos for social media), please edit and cut the audio in your favorite audio editor and then create a separate Production.
The title and other metadata of the podcast/audio can be included directly in your image file.

We created a YouTube playlist with Examples of our generated audiograms.

The first 3 examples include a static background image:


Example 4 uses chapter images, so that the audiogram background image changes over time:

More example can be found in our Playlist.

Technical Details about our Audiogram Generator

We don't offer parameters to customize our audiogram generator, it should produce consistent results without a lot of experimentation. Here are a few technical details, how our audiograms are generated:

Waveform Position
The waveform is always displayed in the middle of the video (see Audiogram Examples).
Waveform Color / Brightness
We analyze the waveform region of the background image, to automatically calculate the optimal color (semi-transparent black or white) and brightness (alpha value) of the waveform.
Waveform Size/Height and Changing Audio Levels
As audio files have very different levels, the generated waveforms might be too big or too small. We included a (much simpler) version of our Adaptive Leveler Algorithm, so that it's always possible to see a natural waveform - in soft and loud parts of the input audio file.
Audiogram Video Resolution and Video Quality / Size
Short audiograms (not longer than 5min) will be encoded as Full HD / 1080p videos (if the image file is big enough), long audiograms (longer than 5min) as HD / 720p videos.
If your input image is quadratic, it will be restricted to 1080x1080 px (short audiograms) or 720x720 px (long audiograms).
We adjust the video quality/encoding parameters according to your input image size and audio length, so that the encoding doesn't take ages and that the generated audiogram video files won't be extremely big.
Audiogram Video Framerate
We use a framerate of 9 frames per second for our audiograms. Higher framerates did not improve the waveform perception but would need much more encoding time and generate much bigger files.

Please contact us if you have further ideas or any feedback, also about our technical details!